Analog Hack (アナログハック, Anarogu Hakku) is the second episode of the BEATLESS series. It aired on January 19, 2018 .

After binding an owner contract with Arato, Lacia has come to live with the Endo's. Arato's sister Yuka has completely accepted Lacia, and even enters her into an hIE modeling audition. Meanwhile, Arato can't hide his apprehension with living with someone who looks to be a beautiful girl his own age.

In Order of Appearance 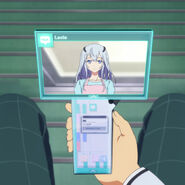 Add a photo to this gallery

Retrieved from "https://beatless.fandom.com/wiki/Analog_Hack?oldid=723"
Community content is available under CC-BY-SA unless otherwise noted.